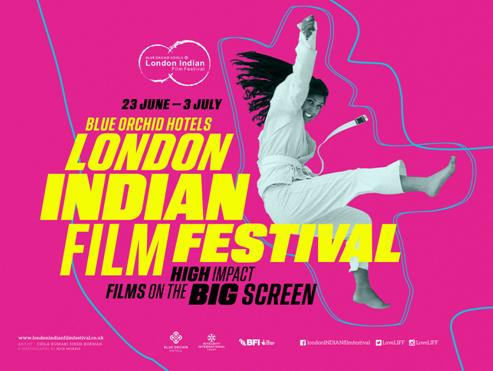 Selection of films from the Indian subcontinent and its diaspora returns to UK cinemas from 23rd June – 3rd July 2022 with a selection of titles available to view UK-wide through its online platform LoveLIFFatHome.com

Festival Director Cary Rajinder Sawhney MBE says It’s wonderful to have director Anurag Kashyap return to the festival with the supernatural thriller DOBAARAA. We have UK premiered a number of Anurag’s films over the last 12 years – including That Girl In Yellow Boots and Gangs of Wasseypur. Anurag delivers yet another fresh directorial approach and a  compelling twisted story. Actor Taapsee Pannu steals the show as a young woman trapped between two lives in different decades.  We are delighted at the exceptionally strong cavalcade of exciting new premieres at this year’s festival in ten different languages and some very rare in person talks headlined by India’s greatest woman filmmaker Aparna Sen”.

Ektaa R Kapoor shares: “DOBAARAA being premiered at the London Film Festival right ahead of its theatrical release is a testament of its new-age, cutting edge narrative being wholly loved and applauded all over the world. DOBAARAA is our first film under Cult Movies, our new film-division which is set to tell compelling, edgy & genre-bending stories. I feel ecstatic for Dobaaraa and its presence amidst various international celebrated films from around the globe and I can’t wait to showcase the film to Indian audiences on 1st July, 2022.”

Female filmmakers are at the forefront of this year’s festival including the European premiere of THE RAPIST starring Konkana Sen Sharma and Arjun Rampal. The screening of the powerful, award winning film will be followed by a Q&A with its director Aparna Sen, India’s most prolific female filmmaker. Konkona Sen is also expected to be attending.

Among other U.K. premieres are Pan Nalin’s uplifting homage to celluloid CHELLO SHOW and Anik Dutta’s APARAJITO – a tribute to legendary director Satyajit Ray’s journey of making his first film, the cult classic ‘Pather Panchali’. An intimate look at modern day Calcutta, ONCE UPON A TIME IN CALCUTTA by Aditya Vikram Sengupta also features in the festival line-up. Set against a score by Academy Award winning AR Rahman, who is also Executive Producer, NO LAND’S MAN stars Nawazuddin Siddiqui as a man dealing with the complexities of identity. Q&A by the film’s director Mostofa Sarwar Farooki follows the film’s premiere.

Under the festival’s ‘Save the Planet’ strand, ecological and climate themes are explored in THE ROAD TO KUTHRIYAR, NO GROUND BENEATH MY FEET and HATIBONDHU. Among the films in the ‘Extraordinary lives’ strand are DUG DUG and PAKA: THE RIVER OF BLOOD.

The ‘Young Rebels’ strand includes GIRLS FOR FUTURE and THE VERY FISHY TRIP.

Cultures collide in selections from the diaspora including British Indian comedy LITTLE ENGLISH, the Pakistani American film AMERICANISH from the US. Archival screenings include classic 1990s music documentary ASIAN VIBES LONDON & MUMBAI, plus a special screening of Richard Attenborough’s GANDHI celebrating the 40th anniversary of this multi Oscar winner.

LIFF has announced a new title sponsor – the Blue Orchid Hotels. With its excellent locations, exceptional standards and commitment to making a difference within communities, the partnership positively demonstrates the support of the arts by private business. The company also pursues a number of charitable endeavours, including raising awareness of child trafficking and women’s rights which are complementary to themes and causes that the festival also platforms.

Title Sponsor Tony Matharu, Patron of the London Indian Film Festival, Chairman of Blue Orchid Hotels and Integrity International Trust and Founder and Chairman of the Central London Alliance (C.I.C.) says: “As a long-term supporter and advocate of the festival, I am delighted to announce Blue Orchid Hotels as Title Sponsor. This year’s programme is packed with exciting, entertaining and thought-provoking films, including films which align with Integrity International Trust’s concerns around human rights, particularly relating to children, minorities and women, and environmental issues – depicted in several of the festival’s powerful premieres. We are delighted to host the festival’s star-studded red-carpet galas and receptions within Blue Orchid Hotels’ venues. Welcoming people back to the big screen experience is an important part of restoring London’s place as the world’s greatest city in which to be entertained, to be educated and in which to live, work, visit and invest; with arts and culture part of the globally recognised soft power that draws people to the capital and the UK”.