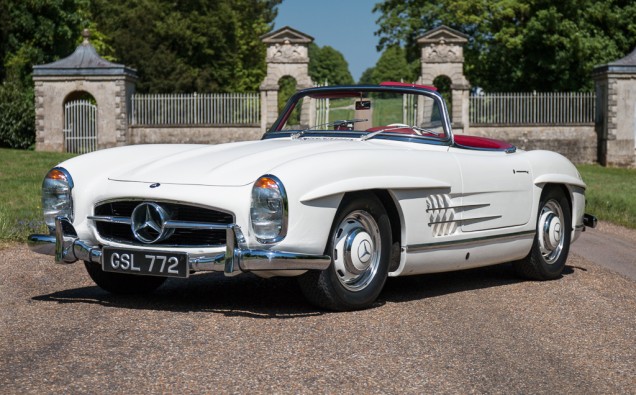 Silverstone Auctions returned to the Silverstone Classic festival for the eighth year running on the weekend of 21st and 22ndJuly, with a catalogue of over 120 best of breed classics, achieving total sales of £6m and a sales rate of 66%.

As one of the highlights of the world’s biggest classic motoring festival, thousands of enthusiasts were joined by online bidders from around the globe, including Australia, USA and several parts of Europe, for the two-day sale.

One of the most anticipated lots of the sale, a 1975 Range Rover with royal provenance, was offered fresh from an exacting restoration and described as the finest Range Rover ever to pass through the auction house. The car was hammered away for a winning bid of £101,250, more than £30,000 above its lower estimate, securing the second highest world record auction price for the model, the top price also achieved by Silverstone Auctions.

Another star of the weekend and the headline lot of the sale was an exceptionally presented 1958 Mercedes-Benz 300SL Roadster estimated at £700,000 to £800,000, the highest valued lot of the sale. Pushing well past its pre-sale estimate, the 300SL sold after a long bidding war to a bidder in the room for £860,625 including premium.

A 1972 Ferrari ‘Dino’ 246 GTS was also the subject of highly competitive bidding, with the UK-supplied, right-hand drive example finding its new home for the sum of £343,125 including premium, more than £70,000 above its lower estimate.

The modern classics line up was headlined by a rare 1992 Mercedes-Benz 190 E 2.5-16 Evolution II with just 34,000 recorded miles. In one of the most dramatic sales of the day, a passionate bidding war was eventually concluded with a winning bid of £158,750 including premium, taking the sale price over the lower estimate by £30,000, and ruling out other bidders.

Other notable sales included the success of numerous Jaguar E-Types. A matching numbers, restored 1962 Jaguar E-Type Series l 3.8 FHC in ready to drive condition exceeded its estimate, selling for £112,500 to a buyer in the room. A 1964 Series I 3.8 Roadster in left-hand drive and a refreshed 1966 Series I 4.2 manual FHC, also in left-hand drive, sold above their guide prices for £95,063 and £90,000 respectively.

Nick Whale, managing director, Silverstone Auctions, commented; “This year’s Silverstone Classic sales saw our biggest ever catalogue of items, including race cars, classic cars, automobilia and two special charitable sales. We’ve seen some fantastic results with a large number of cars selling over estimate, proving that the appetite for quality classics around the world is as strong as ever.”

A special auction held on the morning of the sale to raise funds to support the family of the late broadcaster and friend of the auction house, Henry Hope-Frost, raised a total of £18,000, with all proceeds going direct to the family.

How to Look Ripped this Summer