The inaugural Asian Restaurant and Takeaway Awards (ARTA), the most prestigious celebration of South Asian cuisine in the UK, will be taking place on 30th September 2018 at InterContinental London – The O2. ARTA 2018 will... 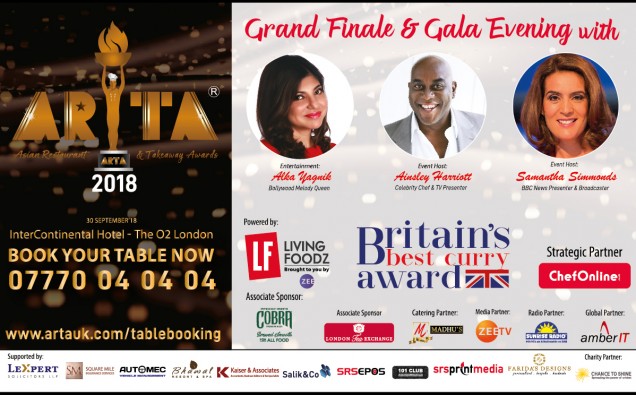 The inaugural Asian Restaurant and Takeaway Awards (ARTA), the most prestigious celebration of South Asian cuisine in the UK, will be taking place on 30th September 2018 at InterContinental London – The O2.

ARTA 2018 will welcome a guest list of the nation’s most respected curry restaurateurs alongside MP’s, dignitaries and celebrities as they collectively honour the achievements of the industry. The ceremony will be hosted by television chef Ainsley Harriott and BBC news presenter Samantha Simmonds. Interspersing the awards presentation will be a curation of world-class entertainment, including a performance by the evergreen Queen of Bollywood music, Alka Yagnik. Charity Partner for ARTA 2018 is Chance to Shine, which will be represented on the night by ambassador and former England cricketer, Devon Malcolm.

The nominations launch for ARTA 2018 took place at House of Commons in January, activating a rigorous selection process led by the UK public, as ARTA will now honour the best chefs and service, staff; their unprecedented artistry and culinary skills; and the environments they create for diners in restaurants up and down the country, as selected by the diners themselves.

Powered by online booking system, ChefOnline.com, the concept of ARTA and its journey begins and ends on a customer level. Galvanised by the technological platforms at their disposal alongside a clientele base of over 100,000 active customers, the dedicated frequenters of curry houses on the streets of Britain were invited to put forward their favourite Asian restaurants and takeaways. The process of nomination via online applications and websites created an authentic list of the nation’s most cherished Asian eateries, based on the opinions of local residents.

Following the nominations launch, ARTA categorised nominated restaurants across 15, distinct regions in the UK and Ireland in order to distinguish the Top 30 South Asian restaurants in each region – from Edinburgh to Southampton, from Belfast to Cambridge, and everywhere in between. A formal assessment was then conducted to determine the leading culinary establishments based on criteria such as quality of service; quality of product; value for money; and food hygiene ratings in tandem with the number of nominations provided by the public. Regional heats or cook-off’s were hosted at local colleges and universities, where restaurateurs had the chance to earn the accolade of being among the region’s top dining establishments.

Following the completion of the regional cook-offs, the finalist restaurants from each region will now be invited to the Grand Finale ceremony at InterContinental London – The O2. The prestigious occasion will witness the presentation of 15 Regional Prizes, the Newcomer of the Year Award and the Champion of Champions Award in honour of the most outstanding Asian restaurant in the UK.

The Asian catering industry is valued at approximately £5 billion. Even so, over the years the industry has witnessed a steep downturn. This decline is largely attributed to the shortage of skilled workers in the hospitality sector, from a lack of talented chefs all the way through to front of house staff. This is due to the UK’s stringent immigration policy relating to skilled workers from outside the EU, coupled with a palpable sense of disinterest among younger people or job seekers with regard to the hospitality sector. The ARTA initiative has involved addressing this insufficiency. Through reaching out to current and prospective students at the regional cook-offs, ARTA has established a program of youth engagement that will help revitalise the food industry by targeting a demographic that is crucial to the future prosperity of the sector. As ARTA has been working with colleges nationwide, it has introduced the industry and prospective workers to one another, inspiring a symbiotic relationship.

ARTA Founder Salik Mohammed Munim says, “It is our maiden journey and we are really engaging the industry, truly recognising the people that work hard day and night, seven days a week, 365 days a year. Our mission is not only about an award, our mission has been to introduce the industry to the regional colleges where we have staff shortages. Working together, it can help the industry by engaging youngsters with the Asian restaurant trade.”

Paul Scully MP says, “The curry industry is an industry that is so dear to my heart because I see the 11,000 or so entrepreneurs around the country that have done so well over the years. What ARTA is doing is actually looking at the industry in a holistic way, bringing in customers, bringing in supporters to nominate restaurants, nominate the skilled people that you have across the industry, not just in the kitchen itself. It is right that we celebrate the very best and inspire the next generation to make sure that this industry not only survives but thrives.”