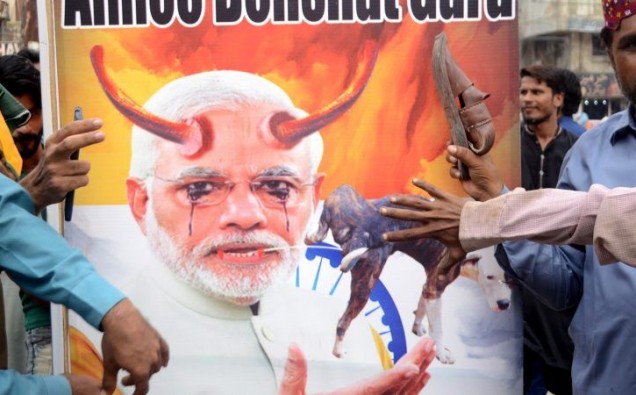 As Indian forces further intensify the clampdown in Kashmir, the Black Day was observed on both sides of the Line of Control (LoC).

Black flags were hoisted on rooftops and vehicles across Pakistan and Azad Kashmir to symbolise rejection of India’s nefarious designs.

Protest rallies were taken out in all small and major cities of the country and seminars were also organised to highlight the plight of oppressed Kashmiris who are being subjected to unprecedented persecution over the last 10 days.

In a statement, Foreign Office spokesperson Dr Mohammad Faisal said, “We stand with our Kashmiri brothers and sisters.” Moreover, a protest demonstration was held in front of the India High Commission in Islamabad to express solidarity with the people of IHK who are facing continued atrocities by Indian occupation forces.

The decision to mark India’s Independence Day as a Black Day was made at the National Security Committee meeting, chaired by Prime Minister Imran Khan last week in the wake of the Indian move to revoke Article 370 that gave occupied Kashmir an autonomous status, and to split the held valley into two territories.

Anti-India rallies followed by protest demonstrations in all towns and cities of Kashmir on both sides of the LoC were the day’s highlight.

In Mirpur, a procession was taken out from district courts premises, which passed through major streets of the city.

A rally was held in Lahore to tell the world that the people of Pakistan and Kashmir were inseparable. Punjab Chief Minister Sardar Usman Buzdar had urged the people to come out in large numbers to participate in the rally.

India’s decision this month, along with a communications blackout and curbs on the movement of those in IHK, has generated a strong response Pakistan, which cut trade and transport links and expelled India’s envoy in retaliation.

The largely symbolic move comes amid growing frustration in Islamabad at the lack of international response over the Kashmir dispute.

The 15-member United Nations Security Council is set to discuss the dispute on Friday, as Pakistan has guaranteed support from China, which also claims part of IHK.

Earlier, the Independence Day of Pakistan was celebrated as the Kashmir Solidarity Day on August 14. Prime Minister Imran Khan addressed the AJK Legislative Assembly in Muzaffarabad on Wednesday amid soaring tensions with arch-rival India over IHK.

He warned India of a strong response if it attempted to attack Azad and Jammu and Kashmir and that international organizations would be responsible if a war breaks out between the two nuclear-armed rivals.

Regarding the possibility of a war with India amid simmering tensions, Imran Khan said, “Modi has played his last card and it will cost him heavily, and he will be paid back in the same coin.”

“The entire nation and Pakistan Army is ready for it,” he said, while stating that judges in India were afraid of Modi-led regime, and they had controlled media and the state of Kashmir had been locked down for the last 11 days.

He revealed that Pakistan would take the matter to the International Court of Justice (ICJ) as Modi had thrown aside United Nations Security Council resolutions regarding the disputed territory.

Meanwhile, occupation forces continued to impose strict curfew and other restrictions across the Kashmir valley on the 11th straight day to prevent people from holding anti-India demonstrations. The authorities converted the valley, particularly Srinagar, into a military garrison by deploying Indian troops and police personnel in every nook and corner. In Srinagar, thousands of troops and policemen were patrolling the deserted streets, lanes and by-lanes to thwart any attempt of people to stage anti-India demonstrations.

The Indian authorities had been maintaining a strict clampdown in the Kashmir valley since the night of August 4 – a day before the Modi government’s decision to scrap the special status of Jammu and Kashmir by abrogating the Article 370 of the Indian constitution.

Internet and telephone links also remained snapped and restrictions on the media continued. Television, telephone and internet links were suspended by the Indian government to prevent demonstrations against its decision of revoking Article 370. The occupied territory remains cut off from the external world due to suspension of internet services and telephone links.