Burma Campaign UK urged the government of Burma to drop all charges against Aung Marm Oo immediately and to repeal all repressive laws, which are being used to arrest... 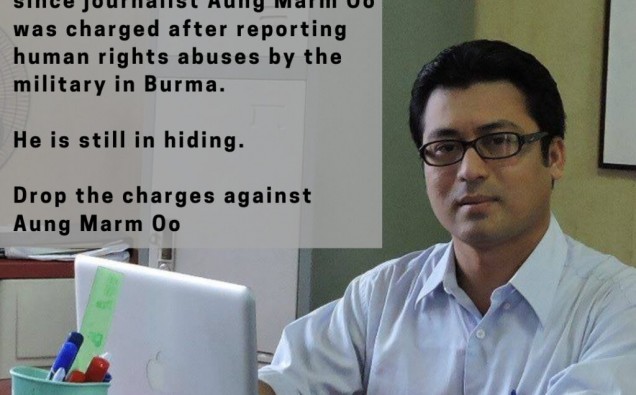 Burma Campaign UK urged the government of Burma to drop all charges against Aung Marm Oo immediately and to repeal all repressive laws, which are being used to arrest journalists and human rights activists for political reasons.

Aung Marm Oo, also known as Aung Min Oo, has been in hiding since 1st May 2019, after receiving death threats and being charged under the Unlawful Associations Act 17(2) for his media group reporting on human rights abuses by the military. Special Branch police interrogated journalists at the Development Media Group, and Aung Marm Oo’s family members were also questioned.

As the military has stepped up its operations against the Arakan Army in Rakhine State, it has been deliberately targeting civilians, with civilians being killed, tortured, arrested and displaced. Human rights violations by the military against the local ethnic Rakhine population and others fit the legal criteria of crimes against humanity and war crimes. The military and government of Burma have made it increasingly difficult for media to report on what is taking place in the state.

Under Aung San Suu Kyi’s government, many journalists, human rights defenders and civilians are being arrested arbitrarily for peacefully protesting or criticising the government on social media. There have been more restrictions on press freedom, and many journalists face harassment for reporting on current affairs.

The Unlawful Associations Act is frequently used by the military to arrest and jail journalists and activists. It effectively allows the military and police to use any contact with a member of an ethnic armed organisation to be considered as providing assistance or promotion or being a member of that organisation.

Many countries have banned organisations that are threats to peace and security. However, Burma’s Unlawful Associations Act goes beyond ensuring peace and security of the country and instead, it has been predominantly misused for political purposes and to cover up human rights violations and suppress media freedom.

“The military and Aung San Suu Kyi are continuing to use repressive laws to abuse media freedom and intimidate journalists such as Aung Marm Oo to stop them reporting anything that is critical or exposing human rights violations,” said Anna Roberts, Executive Director at Burma Campaign UK. “Rather than being respected for reporting on important current affairs, Aung Marm Oo has been forced into hiding and is facing charges that could send him to prison for five years. He should not be facing persecution for doing his job.”