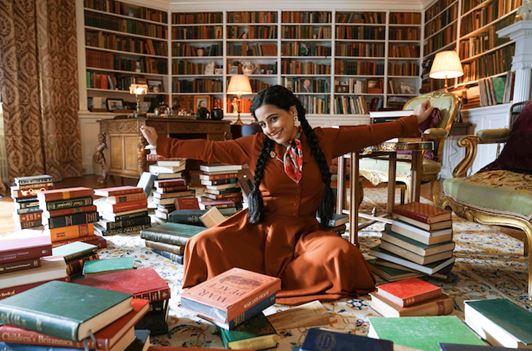 Composed by Sachin-Jigar, and sung by Sunidhi Chauhan, ‘Rani Hindustani’ celebrates Shakuntala Devi’s life as an independent and confident woman

Amazon Prime Video today released a new song of their upcoming biographical drama – Shakuntala Devi. The song, titled Rani Hindustani traces Shakuntala Devi’s awe-inspiring journey. Despite no formal education, Shakuntala Devi inked her name in the Guinness Book of World Records for multiplying two 13-digit numbers in just 28 seconds. The empowering song has been sung by Sunidhi Chauhan and is composed by the composer duo Sachin-Jigar. The lyrics of the song are penned by noted lyricist Vayu.

“Shakuntala Devi’s life is very inspiring. Apart from her mathematical prowess, there’s so much that people don’t know about her life. She was a confident and independent woman and we needed to capture that essence in the song. Vayu has beautifully penned the words and like always, Sunidhi has brought the song to life with her incredible voice. Vidya Balan’s charm and brilliant screen presence makes it a perfect treat for the audience. We hope that the audiences will enjoy and love the song,” said the musical duo Sachin-Jigar.

Directed by Anu Menon and produced by Sony Pictures Networks Productions and Vikram Malhotra (Abundantia Entertainment), Shakuntala Devi also stars Sanya Malhotra, Jisshu Sengupta and Amit Sadh in pivotal roles, and is all set to stream exclusively on 31st July only on Amazon Prime Video in over 200 countries and territories worldwide.

PETS TAKING OVER OUR BEDS