India has a host of talented artists and the youth present their skills in different areas. Chandni Vegad, who hails from Jamnagar in Gujarat, is one such talented artist,... 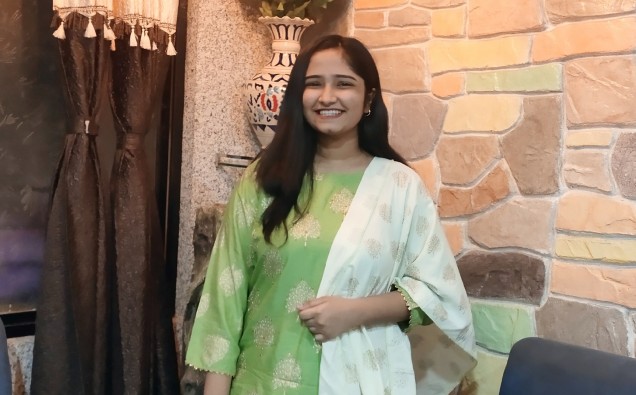 India has a host of talented artists and the youth present their skills in different areas. Chandni Vegad, who hails from Jamnagar in Gujarat, is one such talented artist, who is set to enter Bollywood with big bang. After her voice was heard in a recent show, she was signed for the feature film “Living Relation” being produced under the banner of the “High Speed Cine International”. Ashish Gajera and Sonal are the producers and Arman Zahidi is the director of this film.

Chandni, a resident of Jamnagar, is the daughter of K P Vegad, who was the Senior Civil Judge and Chief Judicial Magistrate. Studying in 10 th standard in “Shri Satya Sai Vidyalaya in Jamnagar, Chandni participated in Gujarat’s “Rajya Kala Kumbh-2018”, Cryst College, Rajkot’s “Spandan-2019” and other contests and came off with flying colours. In most of the competitions, she emerged first and was second runner up in a few other contests. Besides this, she also participated in the contests in Gujarat and Mumbai

The singing has been her biggest aim ever since she began learning the singing at the age of 7 years, She has an enormous interest in classical music as well

On being selected for playback in a film, Chandni said” Dilipbhai who is my father’s friend, heard me in one of the singing competitions and gave me the break. The recording will be held in Mumbai soon. Besides this, the talks are going on with one or two production houses for singing assignments. I will reveal details about them after the talks are finalised”.

About whether she will continue studies and pursue singing or concentrate only on singing career, she said that she will continue both since the education and singing, both are essential in life. The singing is my passion, but simultaneously the study is also essential.

About her singing idols Chandni said “I like the songs of Lata Mangeshkar and Asha Bhosale, the most. Besides I like the singing of the singer Armaan Malik and Arijit Singh. These veteran artists possess distinct qualities. That way I listen to the songs of almost all singers and songstresses.

In these circumstances, the people are curious about the progress of Chandni in Bollywood.

CHHALAANG LEAPS TO VICTORY WITH THE REVIEWS