THE GENESIS OF ON-GOING CONFICT BETWEEN ISRAEL AND PALESTINE:

Israel is a never-sleeping colonial war machine. In recent weeks, its provocations in Jerusalem have increased and it is presumed that it has driven Palestinians to the streets to... 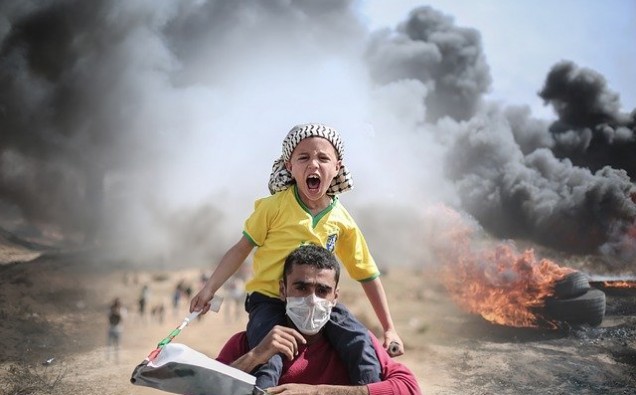 Israel is a never-sleeping colonial war machine. In recent weeks, its provocations in Jerusalem have increased and it is presumed that it has driven Palestinians to the streets to protest.

History:
The biblical Jerusalem is what we call the “old city” today, and it is an occupied part of East Jerusalem. These are the holy places where the Church of the Holy Sepulchre, the Western Wall and Al-Aqsa Mosque are located. The latter two share an area called the Temple Mount.

The Church of the Holy Sepulchre has two Christian holy sites; v Calvary-is believed to be the place where Jesus was crucified and the empty tomb where it is said to be buried and resurrected.

Judaism believes that the Temple Mount is its most sacred place, and it is also the place that mainly accommodates the sacred existence of gods. The western wall is close to the original Temple Mount, making it a place of prayer and pilgrimage for thousands of believers. Finally, the Al-Aqsa Mosque, considered the third holiest site in Islam, is located on the top of the Temple Mount, which is known for its Arabic or noble sanctuary.

This is where the Muslim Prophet Muhammad (PBUH) went there from Mecca, and then ascended to heaven according to what is called the “Night of Journey” in Islamic teachings. These attractions have attracted generations of pilgrims and historians, and hold a special place in the hearts of billions of people around the world.

For centuries, there has been no such conflict. In the 19th century, the Palestinian land was inhabited by a multicultural population, of which approximately 86% were Muslims, 10% were Christians, and 4% were Jews living in peace.

In the late 1800s, a group of Europeans decided to colonize this land. They are called Zionists – extremist Jews. Their goal was to build a Jewish homeland. Before settling in Palestine, they considered the geographic locations of Africa and America.

At first, this immigration did not cause any problems. However, as more and more Zionists immigrated to Palestine, the indigenous people became more and more shocked. Eventually, fighting broke out and the wave of violence escalated. Hitler’s rise to power, coupled with Zionist activities, undermined efforts to resettle Jewish refugees in Western countries, leading to an increase in Jewish immigration to Palestine and an increase in conflicts.

UN Partition Plan
In the end, the United Nations decided to intervene in 1947. However, the United Nations did not follow the principle of “self-determination of the people.” The people themselves established their own national and government systems. Instead, they chose the medieval strategy of dividing the land of others by external forces.

Under tremendous pressure from Zionism, the United Nations recommended that 55% of Palestine be donated to a Jewish state-although the organization only represents 30% of the total population and owns less than 7% of the land.

1947-1949 War
Although it has been widely reported that the resulting war eventually involved five Arab armies, less well known is the fact that during the war, Zionist forces surpassed all Arab and Palestinian fighters – often two to three times. Moreover, the Arab armies did not invade Israel – virtually every battle was fought on land that was a Palestinian state.

Finally, it is worth noting that the Arab army entered the conflict only after the Zionist army carried out 16 massacres, including the massacre of more than 100 men, women, and children in Deir Yassin. The head of a Jewish terrorist organization, the future Israeli Prime Minister Menachem Begin, described this as “excellent” and said: “Just like in Deir Yassin, we Everywhere will attack and strike the enemy. God, God, you have chosen us to conquer.” Zionist forces committed 33 massacres.

By the end of the war, Israel had occupied 78% of Palestine. Three-quarters of one million Palestinians have become refugees; more than 500 towns and villages have been wiped out; and a new map has been drawn in which every city, river and gang has received a new Hebrew language Name, because all relics of Palestinian culture will be deleted. For decades, Israel has denied the existence of such a population. Former Israeli Prime Minister Golda Meir once said: “There is no such thing as a Palestinian.”

After the turbulent events of 1948, 150,000 Palestinians remained in Israel and eventually acquired nationality. However, they remained under military rule until 1966. After the conquest of the West Bank and Gaza Strip in 1967, Israel began to exercise military control over the Palestinians living in the occupied Palestinian territories.

In 1967, Israel conquered more land. After the Six-Day War, Israeli forces launched a very successful raid on Egypt. Israel occupied the last 22% of the Palestine West Bank and Gaza Strip that fled Palestine in 1948. Since the acquisition of territories through war is not allowed under international law, these territories are occupied territories and do not belong to Israel. It also occupied parts of Egypt (since its return) and Syria (still under occupation).

The UN Security Council passed Resolution 242, demanding that Israel withdraw from the territories it occupied in 1967

Israel occupied Palestine’s historical sites, including the Gaza Strip and West Bank, as well as the Syrian Golan Heights and Egypt’s Sinai

After Israel occupied the rest of historic Palestine, it began to establish settlements in the West Bank and Gaza Strip. In these colonies, Jewish settlers were allowed to carry weapons under the protection of the Israeli army. After 20 years of brutal military occupation, the first Intifada began in the occupied Palestinian territory in 1987.

The second uprising, usually called the “Aqsa Uprising” or the Second Uprising, started at the end of 2000 because Israel’s occupation policy not only continued to violate international law, but also deprived the Palestinians of their basic human rights.

On September 28, 2000, Ariel Sharon and more than one thousand Israeli police appeared at the Al Aqsa Mosque in the Old City of Jerusalem. He said: “The Temple Mount is in our hands.” This angered the Palestinians. The Palestinians responded almost immediately to the threat to Al Aqsa, the third holiest site in Islam.

The Israeli occupying forces launched a series of comprehensive military offensives and administrative policies aimed at collectively punishing the Palestinians who rebelled.

According to the Palestinian Center for Human Rights, at least 4,973 Palestinian civilians were killed during the second uprising. Among them, 1,262 children, 274 women and 32 medical personnel tried to provide assistance to injured civilians.

Although the exact end date of the second uprising is still controversial, most sources believe that early 2005 was the period when the uprising subsided. The Palestine Center for Human Rights said that in addition to thousands of casualties, the Israeli occupying forces demolished about 5,000 Palestinian houses and damaged another 6,500 houses that could not be repaired.

In the Sheikh Jarrah neighborhood of occupied East Jerusalem, dozens of Palestinians are facing forced deprivation of property from their homes, which they say is to deport them and completely replace them by Jewish settlements Move.

The Jerusalem District Court ruled that at least six families must evacuate their houses in Sheikh Jarrah on Sunday, despite being passed down through generations.

The same court ruled that the other seven families should leave their homes before August 1. A total of 58 people, including 17 children, will be forcibly displaced to make way for Jewish settlers.

Court rulings are the culmination of decades of Palestinian struggles to stay at their homes. In 1972, several Jewish settlement organizations filed a lawsuit against Palestinian families living in Sheikh Jarrah, claiming that the land was originally Jewish. These groups are mainly funded by US donors, and their tireless fighting resulted in the displacement of 43 Palestinians in 2002, the Hanoun and Ghawi families in 2008, and the Shamasneh families in 2017.

Israel’s annexation of East Jerusalem was largely unrecognized by the international community.

The Israeli settlement project aims to consolidate Israel’s control over the city, which is also considered illegal under international law.

Approximately 200,000 Israeli citizens live in East Jerusalem under the protection of the army and police, and the largest single settlement complex houses 44,000 Israelis.

In April, at least 190 organizations wrote a letter to the Prosecutor of the International Criminal Court calling on him to investigate the imminent forced eviction of Sheikh Jarrah’s families as part of an investigation into war crimes and crimes against humanity in Palestine.

In recent weeks, the English and Arabic hashtag #SaveSheikhJarrah has been circulating in social media to raise awareness and interest at local and official levels in the face of impending shifts.