Sultana Tafadar is the first hijab-clad criminal barrister to be appointed to the Queen’s Council.

Sultana Tafadar, a hijab-wearing criminal barrister, was named Queen’s Counsel. Her Letters Patent were given to her at the Palace of Westminster, and again with her peers at the... 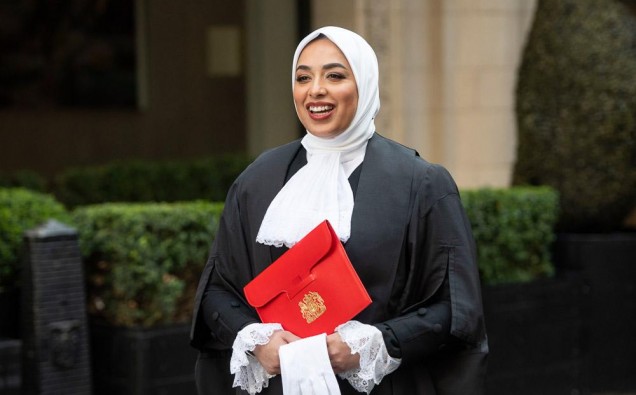 Her Letters Patent were given to her at the Palace of Westminster, and again with her peers at the Royal Courts of Justice.

Ms Tafadar is a Queen’s Counsel, an elite legal group. QCs make up fewer than 2% of the legal profession in the UK.

“I am pleased to be one of only two hijab-wearing barristers ever appointed Queen’s Counsel, and the first in the Criminal Bar,” Sultana Tafadar said ahead of Monday’s ceremony. I am also pleased to join the ranks of pioneering female QCs.

“Yet on such a day, when I reach the peak of my profession in the United Kingdom, I observe with sadness that hijab-wearing women in other nations, such as France, are being denied the same chances.”

“Representation is critical, and the Bar can be challenging terrain for those of us from non-traditional backgrounds, but this is changing.

The Bar was a lonely place when I arrived 16 years ago, with few black and ethnic minority women and no female hijab-wearing criminal barristers.

“We are breaking down these barriers, and I hope many other young ladies will feel empowered to follow in our footsteps, regardless of ethnicity or religion.”

Ms Tafadar is the first hijab-wearing QC in Britain. She also advises states and organisations on human rights and international law, and huge multinational enterprises on equality, diversity, and inclusion.

Ms Tafadar is fighting the hijab prohibition in France. She will later this year make crucial comments to the UN on how the French government violates international law in areas such as civil rights, sex discrimination, religious freedom, and women’s economic rights.

Ms Tafadar grew up in Luton, England, with Bangladeshi immigrant parents, striving to improve the world.

Her hijab-wearing relatives had previously shown that being a visible Muslim lady was no barrier to success.

“Growing up in the 80s and 90s, I saw much of unfairness and racism. I was inspired by MLK and Malcolm X. Were you an activist lawyer?”

“There have been moments when I have been mistaken for the defendant or the interpreter,” Ms Tafadar says. I’ve had issues because of my gender, race, and religion.

“It’s been difficult, but I see my clients from many backgrounds facing similar discrimination.

The law is a tool for me to attain big objectives like equality. It reminds me why I chose this career and why I must succeed.”