Revealed: The best places to work in the UK if you want a pay rise

Whilst there is more to life than money, no one is ever disappointed if they’re offered a pay rise. Now, the best areas to Iive if you want more... 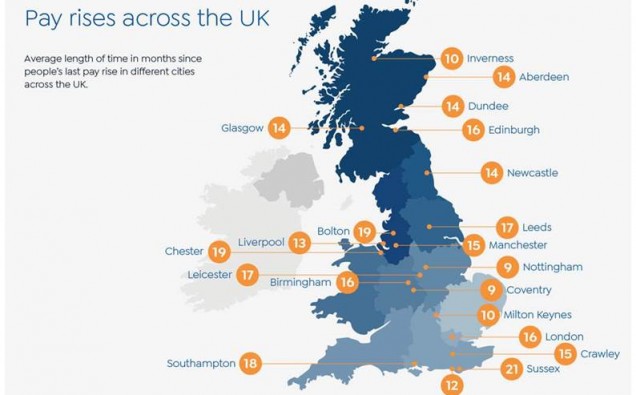 Whilst there is more to life than money, no one is ever disappointed if they’re offered a pay rise. Now, the best areas to Iive if you want more money have been revealed.

Search Consultancy, a multi-discipline recruitment agency with offices across the UK has revealed the top regions to work in if you want more frequent pay rises.

Kent takes the top spot in Search’s latest Salary and Benefits guide with pay rises offered on average every eight months. The south features heavily in the top 10 spots with Milton Keyes, Surrey and Brighton also placing .  The midlands comes in second with Coventry, Nottingham and Derby all making the top 10.

The full list of 50 regions, shows on average how long it has been since people received a pay rise:

Dominic Starkey, Marketing Director at Search Consultancy, said: “There has traditionally been a discrepancy regarding salaries in the South, compared to other regions in the UK due to the increased cost of living. That’s why analysing take home pay can often be a redundant exercise. By utilising  pay increases as a base line as opposed to salaries, we can get a much fairer analysis of the market.

“As working from home becoming much more commonplace, and many jobs advertised as entirely remote, people outside of London and the surrounding area are suddenly open to much larger salaries and benefits packages that would have previous been geographically out of reach. This has the potential to revolutionise the job market and it will be interesting to see how this develops throughout 2021 and beyond.”

Search Consultancy released its latest 2021 Salary and Benefits Guide which is designed to help job seekers benchmark their salary in relation to the industry they work in and the level of experience they have. This equips people with the tools required to navigate new job offers and negotiate pay increases.

To establish the areas most likely to offer pay rises, Search Consultancy surveyed almost 5,000 people and asked how many months it had been since they were presented with a pay increase and also asked which area in the UK they worked.