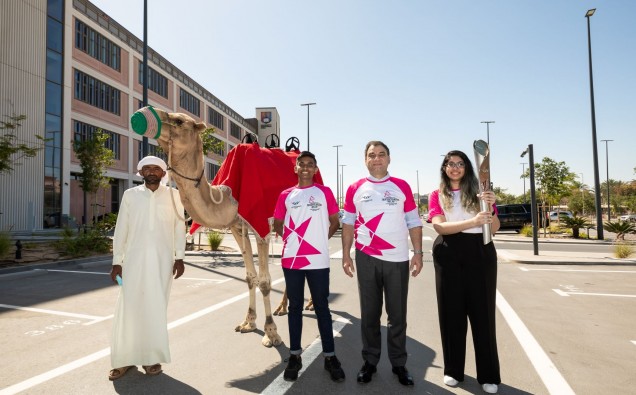 Student Batonbearers carried the Baton into the University’s iconic new campus to be welcomed by Lord Karan Bilimoria, Chancellor of the University of Birmingham, in a ceremony that blended UK and Arabic culture.

The ceremony saw three Batonbearers carry the Baton onto the new smart campus in Academic City, accompanied by a camel – the traditional form of transport in the UAE. Acting as a Batonbearer himself, Lord Bilimoria walked the Baton into the campus building and placed it on a display plinth.

The Baton later departed for Expo 2020 Dubai aboard an electric vehicle, signifying the sustainable future of transport in the UAE and Birmingham 2022’s aim to create a carbon-neutral legacy.

Speaking about the Baton’s arrival in Dubai, Lord Bilimoria commented: “It is pertinent that the Queen’s Baton Relay has arrived for UK National Day at Expo 2020 Dubai. The UK has strong links with the UAE and the University of Birmingham aligned with the country’s national objectives of nurturing talent and developing the industries of the future.

“We are a civic university with a global outlook and I am delighted to welcome the Queen’s Baton Relay to our iconic new Dubai campus ahead of the Baton’s visit to Expo 2020 Dubai for UK National Day.

“Sport is a unifying force and, as part of our commitment to supporting the Birmingham 2022 Commonwealth Games, we are playing the most significant role of any university in the Games’ history. Hockey and squash competitions will take place on our UK campus, where we will also host 3,000 elite athletes from around the world.

“Whether studying in Birmingham or Dubai, our students form one international academic community, and we believe they will be excited by the University’s involvement in such a major global sporting event.”

The Commonwealth Games take place in Birmingham from 28 July to 8 August 2022. The Queen’s Baton Relay events are underpinned by Commonwealth-wide celebrations for staff, students, and alumni and the #gamechangingbirmingham campaign.

Councillor Ian Ward, Leader of Birmingham City Council, commented: “The University of Birmingham – including the staff and students in Dubai – are an important part of Birmingham’s civic family. So, as we draw ever closer to this summer’s Commonwealth Games, it is entirely fitting that the Queen’s Baton Relay should include student Batonbearers from this amazing new campus.

“As someone who was born in Birmingham and has lived there all my life, I’m immensely proud of the University. It was England’s first civic university over 120 years ago and continues to be one of our city’s key anchor institutions to this very day.

“Now, as we see in the UAE, the University represents Birmingham on the global stage and everyone associated with the Dubai campus take pride in the key role their University will play in what I am confident will be the best ever Commonwealth Games.”

Prior to visiting UK National Day, the Baton travelled to 33 Commonwealth nations and territories including Kenya, Nigeria, India, Singapore and Malaysia. After its visit to Dubai 2020 Expo, the Baton will travel to Fiji and a further 35 countries, before arriving back in the UK in the summer, where it will visit Scotland, Northern Ireland, Wales and England.

Dame Louise Martin DBE commented: “The Queen’s Baton Relay symbolises hope, solidarity and collaboration across the Commonwealth, at a time when it is needed most. The visit to the University of Birmingham smart campus in Dubai provides a wonderful opportunity for the Baton to connect communities and celebrate Commonwealth cultures. It marks another exciting milestone for the Baton on its journey to the Birmingham 2022 Commonwealth Games Opening Ceremony on July 28th.”

University of Birmingham environmental scientists have helped create a hi-tech ‘heart’ for the Queen’s Baton, which contains atmospheric sensors with laser technology that analyses the environmental conditions wherever it is in the world.

Augmented Reality (AR) will be used to visualise data captured throughout the journey to invite conversations around air quality across the Commonwealth.

Data collected on the Baton’s journey will contribute to ongoing research projects being conducted across the globe by a team led by atmospheric scientist Professor Francis Pope who said: “We’re proud to provide scientific advice on creating the Baton’s ‘lungs’. Atmospheric data captured during the Baton’s global journey will be highly valuable in starting important conversations around air quality across the Commonwealth.”

The Baton also features LED lighting that displays dynamic performances in response to each Batonbearer’s heartbeat when held. Fitted with a 360-degree camera, the Baton records and transmits real-time imagery and digital information, allowing stories from its journey to be told, as well as GPS technology allowing for its location to be tracked.

The University of Birmingham Dubai’s selected student Batonbearers were: 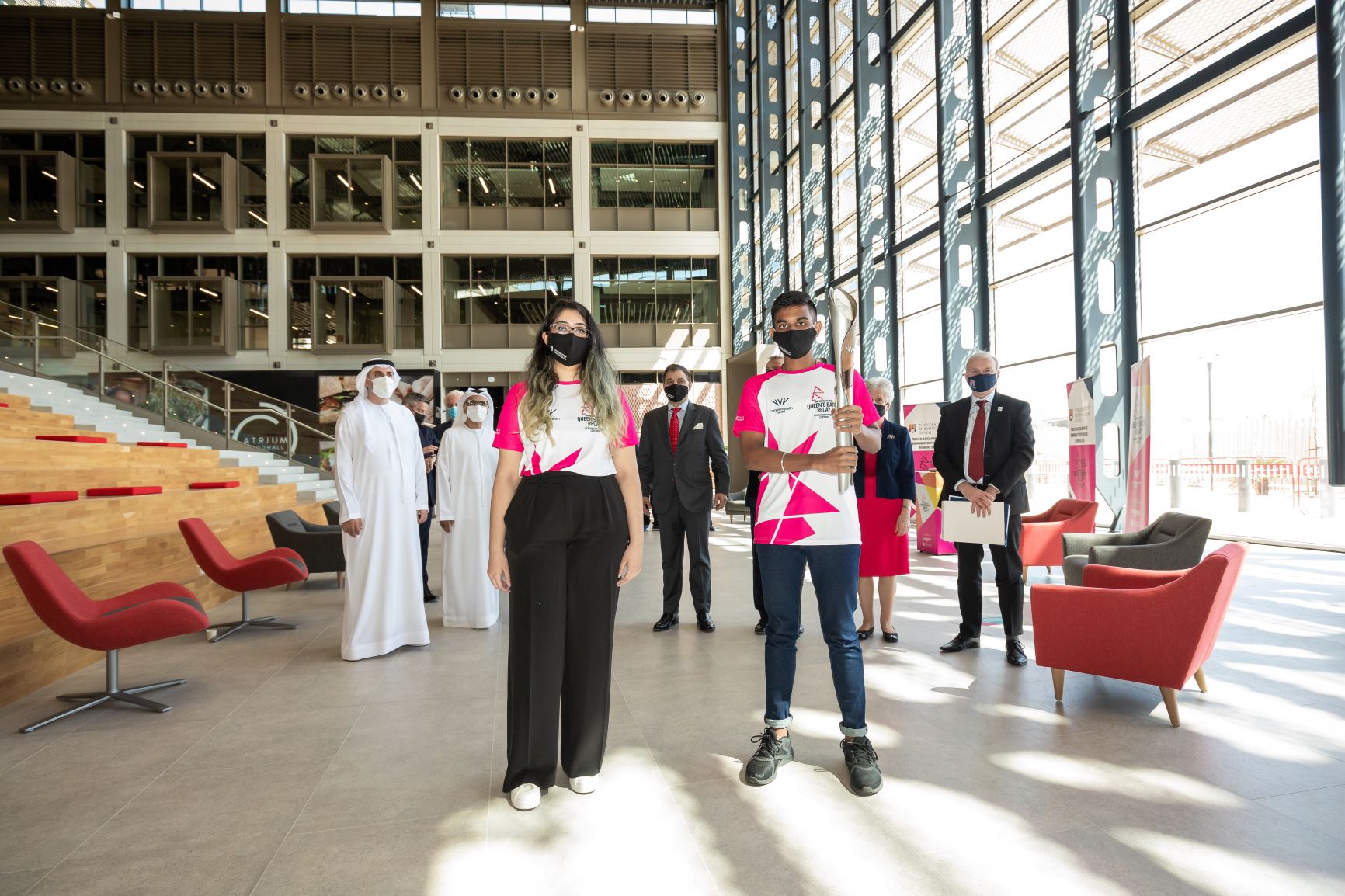