Twenty-two people including women and children died after being trapped in their vehicles in snowstorm near the hilltop town of Murree, officials said early Saturday.  Pakistan Army troops were... 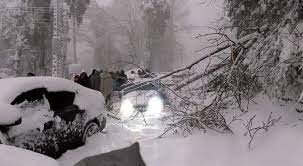 Twenty-two people including women and children died after being trapped in their vehicles in snowstorm near the hilltop town of Murree, officials said early Saturday.  Pakistan Army troops were leading the rescue operation to clear roads and rescue hundreds of tourists still trapped near Murree.

Federal Interior Minister Sheikh Rashid Ahmad told state-run television late Saturday that the situation was under control as officials of Pakistan Army, National Disaster Management Authority, Police and civil administration were actively carrying out relief activities. “(At least) 22 people have died in recent rains and snowfall-related incidents at Murree,” he said. The minister said up to 90 percent roads were cleared till Saturday evening.

The tourists, who were stuck in a traffic jam, suffered from a “food crisis” after being stranded, Interior Minister Sheikh Rashid said in a video statement Saturday. Rashid added that the government had called army and civil armed forces for emergency rescue operations for “nearly a thousand” vehicles still stranded.

“Around 1,000 vehicles were trapped on the highway during a blizzard,” Interior Minister Sheikh Rashid said. A police spokesperson said more than 140,000 cars had entered Murree in recent days to see the unusually heavy snowfall. This caused a huge traffic jam on roads leading in and out of the town, police said. Police also said at least six people had frozen to death in their cars, but it was not yet clear how others had died. Asphyxiation after inhaling fumes was given as a possible reason.

“People are facing a terrible situation,” Usman Abbasi, a tourist stuck in the town where heavy snow was still falling, told reporters by phone. “It’s not only the tourists, but the local population is also facing severe problems” including gas and water shortages, he added.

Following the deaths, the area was declared a disaster area and people were urged to stay away.

Punjab government declared Murree a calamity hit area in view of the situation arising there because of heavy snowfall. In a statement, Punjab Chief Minister Usman Buzdar announced to impose emergency in Murree.

In view of the situation emergency has been declared in all the important departments including police, administration, rescue 1122 and hospitals. Usman Buzdar said that evacuating the stranded tourists is our top priority.  He said that rest houses and other public sector places have been opened in Murree and adjoining areas.  He said the tourists are being provided with necessary relief items including food items.

The Punjab Chief Minister has also given his helicopter for rescue activities. Pakistan Army said Saturday that Army engineers, division and Frontier Works Organisation were working without any pause to assist people stuck at Murree.

According to Inter-Services Public Relations (ISPR) Directorate, rescue centres were established at Army Public School and Army School of Logistics Kuldana and all relief camps have been provided with heating arrangements. All stranded people will be shifted to five army relief camps established at Murree and food, shelter will be provided to people affected by heavy snow fall.

All resources at the disposal of Murree division in terms of engineers machinery mobilised and will remain in the field till all people are evacuated. Special arrangements are made to evacuate people on military transport.

Central Control Division was established at Murree Division, while troops are out in the field and they are clearing traffic and opening roads where machinery can’t reach.

On the special instructions of the Air Chief Zaheer Ahmed Baber Sidhu, personnel of PAF Bases of Kalabagh and Lower Topa are actively participating in relief operation in the snow-hit areas of Murree.

According to PAF spokesperson, Crisis Management Cells have also been established at both bases to facilitate the stranded people and families.

Power supply suspended to Murree city the Minister for Energy Hammad Azhar on Saturday said power supply of Murree city was disrupted due to snow storm. “One feeder out of three pertaining to the city has been restored and the remaining two are expected to be restored within an hour,” he tweeted. He said despite ongoing heavy snowfall, all staff had been directed to ensure power supply.

According to a district administration spokesman, due to heavy snowfall and heavy traffic jam, several vehicles got stuck on Kuldana road after 11:00pm on Friday night. Rescue-1122 launched an operation to rescue the stranded tourists and a large number of citizens were evacuated safely.

Snow began to fall Tuesday night and continued at regular intervals, leading to an influx of thousands of tourists, Reuters reported. But many families became stranded on roads due to the number of visitors, and with local media reporting that over 100,000 vehicles entered the hill station.

Meanwhile, A Police officer, his three daughters and a son were among those died after being trapped in Murree following snowstorm late Friday night.

A police spokesman on Saturday said that the deceased’s wife and a son were at home in Islamabad.

ASP Kohsar Benish, SHO Kohsar were present at the house of the deceased’s ASI Naveed Iqbal, who was currently posted at Kohsar police station. The officer was a resident of Dadhial village, Chakwal district, Talagang.

Islamabad Police are standing by the family in this difficult time, IG Islamabad said in a press statement and expressed deep sorrow over the demise. All possible cooperation will be extended to the family of the late ASI, IG Islamabad added.

Three ambulances of Islamabad police were sent to Murree to collect the dead bodies. Heavy contingent of police were also deployed at Bahra Kahu on Murree Expressway.

Jigsaw Birmingham Dignity Distribution – HOW MUCH IS YOUR SISTERS DIGNITY WORTH?