Former England striker Michael Owen has urged more British Asians to take up football after launching the inaugural IPLSOCCER tournament which will take place at Pride Park, Derby, on... 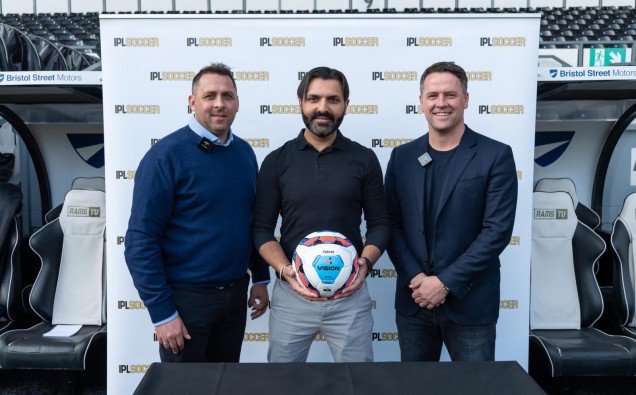 Former England striker Michael Owen has urged more British Asians to take up football after launching the inaugural IPLSOCCER tournament which will take place at Pride Park, Derby, on May 8 2022.Recent data from the Professional Footballers’ Association (PFA) reveals that there are only 115 British South Asian background players out of almost 15,000 players in academy and professional football, equating to less than half of one per cent of total professional footballers.The IPLSOCCER tournament, the UK’s first nationwide British Asian football tournament, will feature teams from London, Derby, Birmingham and Leicester, with players selected through regional trials and networks in a bid to give British Asians a chance to showcase their talents.  Each team will have a former Premier League star playing for them, including former Arsenal and Liverpool winger Jermaine Pennant; former Liverpool and Leicester City striker Emile Heskey; former Aston Villa winger Lee Hendrie and former Aston Villa striker Gabby Agbonlahor.Michael Owen said: “Sport is one of the few institutions that can break down barriers and stereotypes but despite the diversity in the current England squad, no player of South Asian origin has won a senior England cap in over 146 years.“British South Asians continue to be under-represented in professional football. Improving those statistics and providing fully inclusive opportunities for all are at the core of the IPLSOCCER programme.”Professional scouts are being invited to the tournament from a number of professional clubsFormer Newcastle and Cardiff City striker and IPLSOCCER ambassador Michael Chopra, whose father is of Indian descent, said: “It is a pleasure to collaborate with the IPLSOCCER initiative. So much needs to be done to bring more young British Asian players to the scene. I believe that IPLSOCCER has a strong base, and moving forward we shall hopefully see many more UK Cities with their own IPLSOCCER teams competing annually.”There are plans to expand the event in 2023 to include teams from more regions and include a women’s tournament to reflect the increasing importance and popularity of the women’s game.Sanjay Bhandari, Chair of Kick it Out, commented: “British South Asians have found success across many industries including sport. But the visible lack of British South Asians on the pitch is the biggest anomaly in English football. “It is an embarrassing problem but also an enormous opportunity that we can no longer ignore. We must address it collectively.“We welcome the efforts of the IPLSOCCER tournament, and Michael Owen, in providing a showcase for talented footballers from the British South Asian community, and look forward to joining them at Pride Park.”IPLSOCCER will also be making a donation to Khalsa Aid, an international NGO with the aim to provide humanitarian aid in disaster areas and civil conflict zones around the world.

Fantastic Foods to have at Ramadan