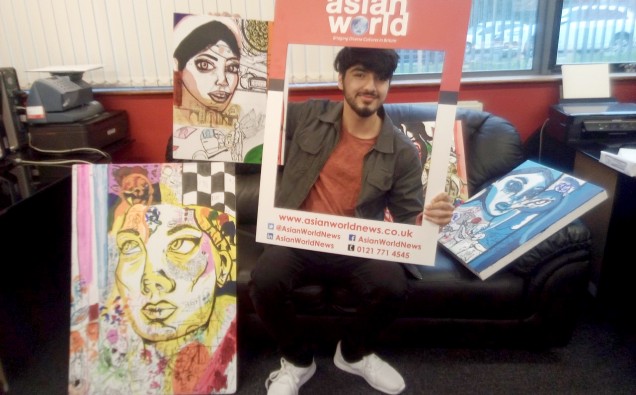 Amaan Jahangir is the latest young artist to come out of Birmingham. He is a 19-year-old freelance artist currently studying BA (Hons) Fine Arts. at Birmingham City University. To Amaan, being a freelance artist means having the freedom to do what he
wants. This allows him to create a material with a personal meaning, as a form of
self-expression.

Amaan sketched as a kid, however, he did not take it seriously until this year. He has completed 2 pieces in the past 2 months. His second piece reaches an impressive height of 6 foot 1 inch. Since then, he has been creating 3-4 pieces of art every week.

In his spare time outside of Art, Amaan enjoys producing ambience music beats and designing clothes. With an increasing popularity, Amaan is having more people contacting him to do artwork for them, and also has an art exhibition coming up through his university within the next six months.

Amaan spoke about his future clothing line, he noticed that there is a massive gap between men’s and women’s high street clothes. He claimed that for women’s clothes, you can buy something expensive from a designer, and then find it somewhere else at a cheaper price without the designer label. However, for men, there is a £3000-4000
gap on men’s clothes.

Amaan admitted that one good flaw that he has is that he is really self-critical and that when it comes to his artwork, he constantly works on perfecting it until he believes it is good enough in his eyes. To him, self-belief is so important living in a world where
people constantly try to shut each other down, you have to remind yourself that
one day, I will be better. You can follow Amaan’s artwork on: