In the summer of 2019, Alauda Aeronautics and Airspeeder Founder, Matt Pearson outlined a vision to create the most exciting next generation motor sport on the planet. In doing... 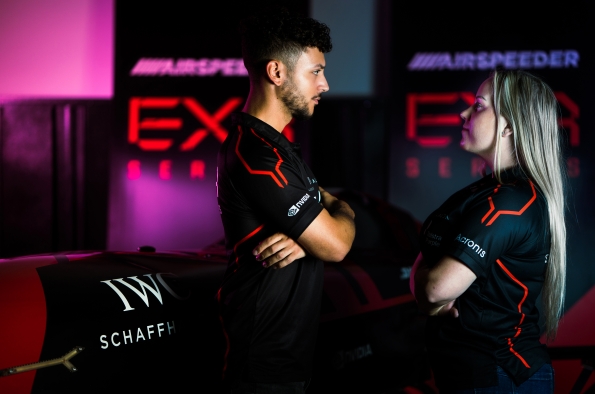 In the summer of 2019, Alauda Aeronautics and Airspeeder Founder, Matt Pearson outlined a vision to create the most exciting next generation motor sport on the planet. In doing so, accelerating the arrival of the flying car mobility revolution we have been promised for generations.

Since then, a dedicated team of engineers, technical and sports rights minds drawn from the most celebrated names in motorsport, performance automotive and aviation have developed the world’s first and only fully functioning electric flying racing cars.

WORLD’S FIRST REMOTELY PILOTED FLYING CAR RACES: These vehicles will soon take place in a series of ground-braking races named the EXA Series. These historic first electric flying car Grand Prix will be competed by the world’s best Speeder pilots. They will race blade-to-blade at speeds of up to 300 km/h in locations where racing has never taken place before. This EXA Series is the permanent development formula for the forthcoming Airspeeder crewed electric flying car reces. As such, the competitors that have been chosen to take part will embark upon an extraordinary development journey, ascending from elite remote pilots into true history makers as the world’s first competitors in the forthcoming Airspeeder crewed races.

READY TO RACE: These next generation racing machines publicly flew for the first time in the summer of 2021 through development flights that have taken place in secret locations across the deserts of South Australia. While the technical team worked tirelessly to engineer and validate these revolutionary flying vehicles, more than 1,500 individuals applied to become history makers and pioneers as the world’s first electric flying car racing pilots. Indeed, in June 2019, Matt Pearson stood at the Agility Prime gathering of the world elite civil and military pilots and announced an open invitation to pilots. This drew the widest talent pool ever assembled to a new form of motorsport. Thousands of individuals from across the world drawn from aviation, racing, performance automotive, UAM flying and even eSports answered the call to make history as the world’s first electric flying car pilots.

An exhaustive process of selection followed. Key attributes far beyond just competitive instincts were assessed in making the final choices. To be among this initial number, raw pilot skill is not enough. These individuals have been chosen because of their ability to work in lock-step with the greatest technical minds to help develop both an entirely new form of game-changing technology and the very fundamentals of a sport that promises to rapidly accelerate its development. These women and men are therefore not only elite level competitors but also proved an extraordinary level of sensitivity to the technical requirements to test and refine a form of aerial motor-racing built from a blank sheet of paper.

In that sense, they are the ultimate development racing drivers and will work as a vital arm of the Alauda Aeronautics engineering team to lead an approach to refining the dynamic and tactical nuances that will make the EXA and Airspedeer races the most compelling and progressive sporting entities in the world. Now, as these historic first remotely piloted Grand Prix races draw nearer, now is the time to reveal the first pilots that will plot a course to victory and a place in the history books of both the dawn of a new sport and a new, bold era in advanced air mobility.

EMILY DUGGAN, RACING DRIVER “At heart I am a racer. I am joining Alauda and Airspeeder to push the boundaries of motorsport and make history as the world’s first winning electric flying car racer. I’m honoured to be part of making history by developing this entirely new generation of motorsport. ”

Emily is Australia’s most successful current racing driver. She has been recognised as a rising star woman in sport. A career that started in the NSW Excel Racing Series soon progressed to becoming the first female driver to race in the Australian V8 Touring Car Series. She has raced at Bathurst where she secured fastest lap in the 2016 Challenge Bathurst and has since completed in both the Australian Toyota 86 Racing Series and Kumho Super3 Series. Emily is a hands-on developer of racing cars and regularly works on the mechanical elements of the machines she drives. Emily has enjoyed much success on the track, scoring 12 wins, 33 podiums and 2 poles in her career.

ZEPHATALI WALSH, RPAS PILOT “Racing has always pushed the limits of what is possible for both humans and their creations. I’m excited to demonstrate, through the competitive environment created by Airspeeder racing, technology that will help shape a flying-car future personal transport for my son’s generation.”

Zephatali is a born competitor. He developed his sporting instincts as a surfer before starting a career that has seen him ascend to being one of the most admired multi-blade pilots in the world. He sees a natural progression between the sports. “The feeling of flying fast with high precision leaves me ecstatic and in awe of experience. I want to surf the air.” He is no stranger to competitive racing in a cutting edge sport. In 2020 Zephatali was drafted into the Drone Champions League where he competes with Raiden Racing. Like many prospective Airspeeder pilots his background sits along with the requirements to understand the wider context of the racing he will take part in. Indeed his path as a student of Environmental Science has developed a fascination with the role that racing plays in creating and accelerating a new clean-air mobility revolution.

FABIO TISCHLER, FPV PILOT“I’m an instinctive racer with and am driven by my motto to ‘stop thinking and start flying’. Joining Airspeeder and Alauda gives me the opportunity to make history in these incredible first flying car Grand Prix. I’m so happy to be part of a truly progressive step towards a long-promised flying car future.”

Fabio is a world-renowned FPV drone pilot. His work has taken him around the world capturing footage from brands including Red Bull, Toyota and Go Pro. Fabio’s path to racing is less than conventional. He gave up a corporate career and an education in finance to pursue his dream to unleash the potential of FPV drones to capture incredible content. Originally born and raised in Germany, he relocated to Sydney, Australia in 2015 to pursue a dream to fly drones professionally. He soon built a large social following through the creation of some of the most captivating film content in the business. This drew the attention of Alauda who invited him to become part of EXA, the world’s first series for remotely-piloted electric flying racing cars.

TESTING, DEVELOPMENT AND RACING: This first intake of pilots will undergo a rigorous process of training and development. This will include the logging of over 2000+ collective hours in the Alauda Aeronautics 6-DoF VR simulator, which will mimic an MK4 circuit race within an XR environment.

Alauda’s engineers and its technical collaborators including Telstra, AWS and NVIDIA, pilots will stress-test the Mk3 and Mk4 vehicles inside Unreal Engine to simulate racing.

Through their training programmes and the races they will master the dynamics of racing vehicle with the same thrust-to-weight ratio as an F16 fighter jet but with the added ability to perform rapid F1 car style hairpin turns. Through uncrewed EXA races and crewed Airspeeder races the latest augmented reality technology will be proven. This will seamlessly display the digital sky tracks that will define race-courses in some of the most remote and visually arresting scenery in the world.

A full suite of safety systems will also be pioneered. A systems based approach to safety integrating attest LiDAR and RADAR systems in a suite of technologies termed the ‘Virtual Force Field’ will free the pilots to compete in blade-to-blade proximity without the risk of colliding.