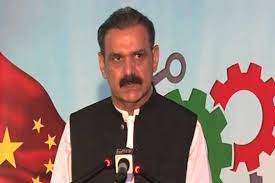 He said the Hakla-DIKhan motorway was near completion and would likely be opened for traffic in August/September this year. “Hakla- DI Khan Motorway construction work is in full swing, current progress is 86%.Will be commissioned by Aug/Sep,” he said in his tweet.

The Chairman informed that with priority on the Western route now, two other segments (Zhob-Quetta, Hoshab-Awaran) had already been started.

According to an official in CPEC Authority, under the CPEC, some 1,100 kilometer roads had been completed while 850 kilometres were under construction.

On the Western route, he said, the four-lane Hakla-Dera Ismail Khan Motorway was in the final stages. Its total length was 285 kms, which had been divided in five packages. The first 55 kms package would be completed on priority, which started from Yarik near D I Khan and ended at Rehmani Khel, the official told media.

The National Logistics Company (NLC) has completed all infrastructure work of the motorway by keeping in view the international standards. The infrastructure work included construction of road, two Interchanges at Abdul Khel and Yarik, six underpasses, four bridges, residential facilities and other development works.

The motorway passes mostly through deserted areas where there is dearth of green areas, so around 150,000 trees have been planted along the motorway. The motorway would not only provide a fast and comfortable traveling facility for the commuters, but it would also link National Highways N-50 and N-55 with the motorway at DIKhan, he said.

After the completion, the travelling time between Islamabad and DIKhan would be reduced from existing over five hours to only two and half hours, the official added. He said the second part of the western corridor, Yarak-Zhob-Quetta, was 540km long and would decrease the distance from Islamabad to Quetta to only 830km and would reduce travel time to eight hours.

Similarly work on the 146 kilometers Hoshab-Awaran motorway has also been started which would improve connectivity with Gwadar port besides improving life standards of the people living along the road.

Talking about the overall progress of CPEC, the Authority’s official said the mega project would move forward with more pace during the current year and the years ahead, which would further strengthen the bilateral relations between Pakistan and China.

Their strategic relationship, which was being strengthened with every passing day, was of great importance both on regional as well as international fronts, the official said.

He said in the next phase, work on four important sectors, including industry, agriculture, socio-economic development and Gwadar New City would also be done at a fast pace.

The official said nine out of 22 energy projects had been completed, while five mega electricity projects in Thar, Kohala, Azad Pattan and others were in the pipeline. After completion of all the projects, Pakistan would not only become self-sufficient in the energy with addition of 17,000 MW electricity to the national grid, but would also be able to export it.

hinese Ambassador to Pakistan Nong Rong, in a recent statement, had also expressed satisfaction over the progress of CPEC projects, the official said. He said at present, work on four Special Economic Zones (SEZs) was underway. Some 2,000 local and foreign investors had expressed intent to invest in the Rashakai SEZ. The Rashakai Zone, the official said, would spread over 1,000 acres of land.

The Federal Government had decided to develop it into three phases. About 247 acres of land would be developed in the first phase, 355 acres in the second phase and 399 acres in the last phase.

Similarly, 210 MW electricity would be provided to the zone in three phases whereas the government had also allocated Rs 1.203 billion for provision of gas, the official said. He said over 400 industrial units, including garments and textile, domestic goods, electronics, electricity accessories, pharmaceuticals and others would be set up in the zone.

Surge in demand for used hybrids this year