Seven baton bearers – athletes and students from the University of Melbourne and University of Birmingham – marked the Queen’s Baton Relay arrival in Australia, running with the Baton... 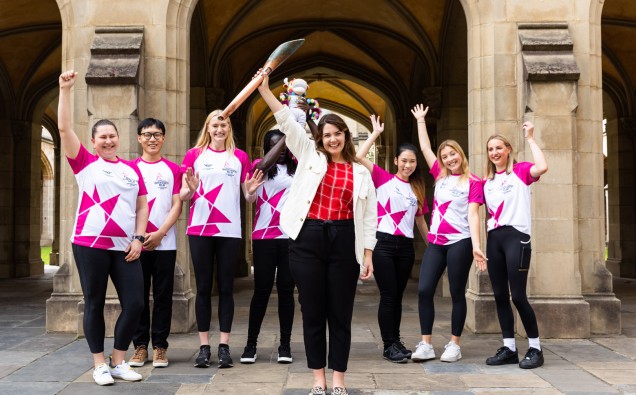 Seven baton bearers – athletes and students from the University of Melbourne and University of Birmingham – marked the Queen’s Baton Relay arrival in Australia, running with the Baton across the Parkville campus in Melbourne.

“Sport is a unifying force and, as part of our commitment to supporting the Birmingham 2022 Commonwealth Games, we are holding a series of academic, student and partner events in Commonwealth countries to coincide with the Queen’s Baton Relay visit.

“I am delighted that we can hold these exciting events, focussing on how we work collaboratively with research and education partners to tackle global challenges and help improve the quality of life for people in Australia and beyond.”

Pro Vice-Chancellor (International) Professor Adrian Little, welcomed the Baton onto the Melbourne campus, along with Catriona Boyd, Deputy Consul General, from the Consulate of United Kingdom.

“I am very pleased that our university is playing a part in this significant event – the Commonwealth Games are a great example of the strength of global partnerships. As an institution our own partnerships, including with fellow Universitas 21 member the University of Birmingham, are core to our identity and make our research and our engagement with students richer,” Professor Little said.

“Sport plays an important role in connecting us to our global community in the spirit of competition, and Australia is a proudly sporting nation. I’m particularly pleased that our student athletes are represented here today, and I am excited to see many more competing on an international stage when the Games commence.”

“This alliance reflects a strong UK-Australia Higher Education alliance. Both in terms of educational opportunities for students, with significant student exchanges and joint PhD awards, and real areas of

“And sporting events like the Commonwealth Games provide a fantastic opportunity to celebrate our relationship, with some friendly competition!”

The seven baton bearers from the University of Melbourne are:

The University of Birmingham’s environmental scientists have helped create a hi-tech ‘heart’ for the Queen’s Baton, which contains atmospheric sensors with laser technology that analyses the environmental conditions wherever it is in the world. Augmented Reality (AR) will be used to visualise creatively data captured throughout the journey to invite conversations around air quality across the Commonwealth.

Data collected on the Baton’s journey will contribute to ongoing research projects being conducted across the globe by a team led by University of Birmingham atmospheric scientist Professor Francis Pope.

Excel London to host 20,000 Muslims for a celebration of food, shopping and culture

The most fitness-obsessed UK cities