A nine-wicket victory over South Africa in the third and final one-day international at Centurion gave Bangladesh their first series victory in the country, in any format. Tamim Iqbal... 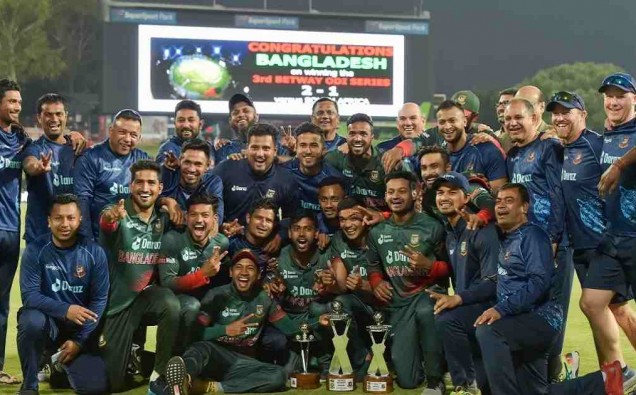 A nine-wicket victory over South Africa in the third and final one-day international at Centurion gave Bangladesh their first series victory in the country, in any format.

Tamim Iqbal scored 87 not out from 82 balls as the Tigers defeated South Africa by five wickets at SuperSport Park. Taskin Ahmed claimed a five-wicket haul to help the Tigers reach their target of 154 with 141 balls left in the game.

Bangladesh had never won in South Africa before their 38-run win in the ODI series opener at Centurion.

With South Africa removed in 37 overs and the visitors closing up the series victory in 27 overs of the chase, it was the visitors’ second triumph at SuperSport Park in less than a week.

From 46-0 in the second One-Day International in Johannesburg to 46-0 in the series decider, South Africa collapsed after Quinton de Kock (12) was caught by Mehidy Hasan at long-off. South Africa lost all ten of their wickets for 108 runs from that moment.

The Proteas were reduced to 83-5 as Temba Bavuma (2) and Rassie van der Dussen (4) were both out cheaply, and both Kyle Verreyne (9) and top-scorer Janneman Malan (39) were taken out by Taskin.

Afterwards, Taskin dismissed David Miller (16), Dwaine Pretorius (9) and Kagiso Rabada (9), with Keshav Maharaj (28), who had hit 28 runs, being the final man to be run out by Tamim.

Tamim then erupted with the bat, smashing 14 boundaries in 10 overs, including four in five deliveries off Kagiso Rabada in the 10th over, to take the match.