Almost three years of work to redevelop the city’s Alexander Stadium has reached its most significant milestone yet – with the venue handed over by the city council to... 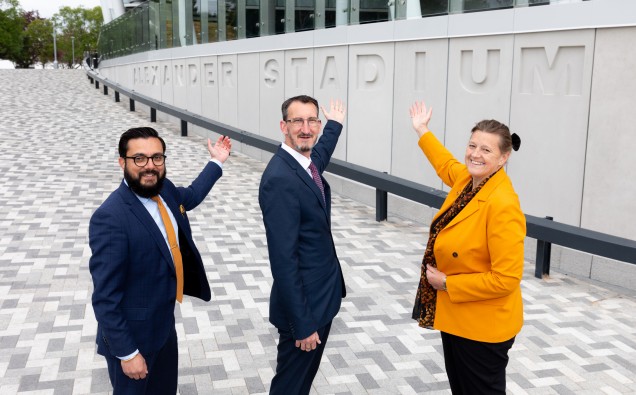 Almost three years of work to redevelop the city’s Alexander Stadium has reached its most significant milestone yet – with the venue handed over by the city council to Birmingham 2022 for this summer’s Commonwealth Games.

The council has overseen the £72million project to revamp the stadium ahead of the biggest event in the city’s history.

Despite planning permission being obtained just before the wettest February in history (February 2020) and the work being delivered during the unprecedented circumstances of the coronavirus pandemic, the scheme has remained on budget and schedule.

After the handover, Birmingham 2022 has now taken up tenancy and will finalise the temporary Games-time enhancements that will turn it into a 30,000-seat venue for the Opening and Closing Ceremonies as well as all of the athletics and Para athletics competition.

Post-Games, the temporary overlay will be removed, leaving a legacy facility with just under 18,000 seats, acting as a focal point for sport, health, wellbeing and community activity in Perry Barr and the wider area of north west Birmingham, with a strong claim for the modernised facility to once again be declared the home of British athletics.

Cllr Ian Ward, Leader of Birmingham City Council, said: “The new-look Alexander Stadium is absolutely stunning and it’s testament to the vision and hard work of everyone involved in this project that it has already been hailed as the best athletics stadium in the country.

“Birmingham has a venue to be truly proud of and we look forward to welcoming athletes, coaches and spectators for what I am confident will be an unforgettable Commonwealth Games.”

Dave Wagg, Head of Sport and Physical Activity at Birmingham City Council, said: “Having been working in sport and leisure for the council for 25 years, the pride I feel in having overseen the transformation of this facility is almost overwhelming.

“Despite the massive challenges thrown at us over the last two years, none of which could have been imagined at the time Birmingham was named as host city for the Games, we have come through and delivered exactly what was required.

“That is due to the hard work and effort of many people engaged on the project – I offer my thanks to everyone who had a role on the scheme and cannot wait to see the Stadium on the international stage for Birmingham 2022.”

Dominic Olliff, Director of Venues for Birmingham 2022, said: “The newly redeveloped Alexander Stadium looks fantastic. We are delighted to take up tenancy for the next few months, as we make the final preparations for and then deliver the Birmingham 2022 Commonwealth Games.

“As it will host the track and field programme, and our Opening and Closing Ceremonies, the Stadium is a hugely important venue for the Games, and it has been a joy to witness its incredible transformation over the last couple of years.”

As well as funding for the Stadium, the West Midlands Combined Authority (WMCA) has also supported Birmingham 2022 with the development of new transport infrastructure, skills training to support local people into jobs with the Games and, through Transport for West Midlands, is coordinating road, rail, bus and tram networks to ensure the region keeps moving during this summer’s event.

Andy Street, the Mayor of the West Midlands and chair of the WMCA, said: “The Alexander Stadium will be a real focal point for the Commonwealth Games, and I am delighted we have been able to support its redevelopment.

“Not only will it be a great asset for the region supporting economic growth and jobs, but by being a world class sporting venue on our doorstep it will help to inspire more people to get active and improve the region’s health and wellbeing.

“The £25million we have put towards the stadium is just a part of the huge investment being made by the WMCA across the region ahead of this summer’s Commonwealth Games. This includes vital investment in Perry Barr itself through a new railway station, cycling and walking facilities, and a new bus priority route to make it one of the best-connected areas in the whole city.”

Louise Brooke-Smith, Board Director of Greater Birmingham and Solihull Local Enterprise Partnership (GBSLEP), said: “Working with Birmingham City Council and other partners, our investment of £20million has culminated in the delivery of this world-class sporting venue.

“It’s set to play a pivotal role when our city and region is in the international spotlight later this year. Our contribution has not just funded a stage for sports and events but it’s leaving a legacy for the local area. Residents and businesses in Perry Barr are already benefitting from the wider regeneration that is taking place.

“This scheme was one of over 100 projects funded through our £207.9 million Local Growth Fund which GBSLEP delivered through our triple helix structure of bringing public, private and academic sectors together to drive forward inclusive economic growth.”

The Alexander Stadium will stage the Opening Ceremony for the Birmingham 2022 Commonwealth Games on the 28 July and the closing Ceremony on the 8 August. The athletics and Para athletics programme will be held in the stadium from 2 to 7 August. Tickets for the Games went back on sale last month and all the details are available at www.birmingham2022.com