Khyber Pakhtunkhwa has reported at least seven new suspected cases of Coronavirus who have been shifted to hospitals. The suspected coronavirus cases are said to have returned from China... 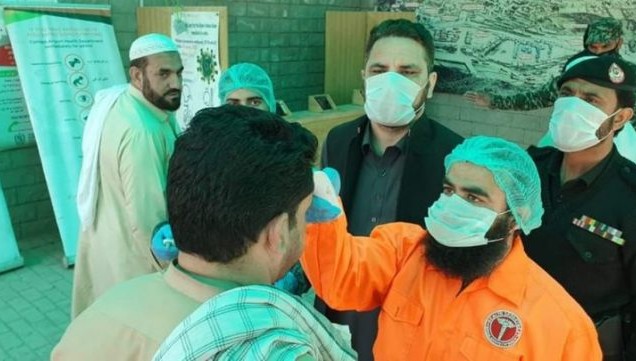 Khyber Pakhtunkhwa has reported at least seven new suspected cases of Coronavirus who have been shifted to hospitals. The suspected coronavirus cases are said to have returned from China and Iran. Four suspected cases were reported from Mardan among whom two were admitted to Mardan Medical Complex (MMC), while two others were allowed to go home after clearance.

The MMC spokesman Dr Javed Iqbal said two patients were cleared while samples of two suspected cases have been sent to the National Institute of Health (NIH) and once they receive test results, the relevant authorities will announce in this regard. The spokesman said one must not pay heed to the rumours about the emergence of coronavirus cases on the social media as no case has been confirmed yet.

Khyber Pakhtunkhwa Finance Minister Taimoor Saleem Jhagra has also expressed concern over rumours about the emergence of coronavirus cases in Mardan and appealed to the people to show maturity in sharing such things as it is a very serious issue which needs extreme care and caution.

According to the Khyber Pakhtunkhwa Health Department, 36 suspected cases emerged so far in the province, out of which 27 have been cleared and the tests of others are being conducted and results are awaited.

In another development, the Khyber Pakhtunkhwa government has decided to close all out-patient departments (OPDs) in the Lady Reading Hospital (LRH) the largest public sector hospital of the province. The decision has been taken owing to the fear of the spread of coronavirus amid the influx of so many patients at the OPDs of LRH.

The LRH spokesman Mohammad Asim said there will be no OPD facility at LRH from Monday. Emergency services would remain open round the clock.

The all-district administration of Khyber Pakhtunkhwa has closed at least 200 wedding halls in the metropolis owing to coronavirus fears. Reports said many wedding ceremonies had to be suspended or rescheduled due to closure of wedding halls.

However, all the restaurants and other business and shopping centres are still open and people are going there as per routine.